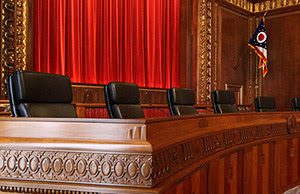 On October 12, 2021, Jay Carson, on behalf of Wegman Client The Buckeye Institute filed an amicus brief with the Ohio Supreme Court.  The brief urges the court to allow Governor Mike DeWine the authority to withdraw from the Federal Unemployment Compensation Program which would result in economic development.

In March of 2021, Governor Mike DeWine announced his decision to withdraw from the Federal Unemployment Compensation Program encouraging Ohioans to return to work.  In response to that decision, Candy Bowling filed a suit in Franklin County alleging that a 1930s statute requires the governor to accept all federal money offered.  The Court ruled in favor of the governor upholding his right to opt out of the program.  Soon after, the Tenth District Court of Appeals reversed the decision which allowed for the $300 per week unemployment bonus to be reinstated and paid retroactively.

The brief  “focuses on the important public policy implications this case holds for Ohioans and why this case presents an issue of great public interest,” particularly the negative impact the compensation program has on economic development in Ohio.